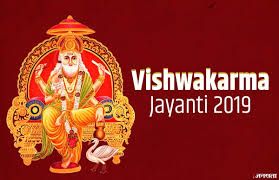 vishwakarma Jayanti is a day of celebration for Vishwakarma, a Hindu god, the divine architect
He is considered as swayambhu and creator of the world. He constructed the holy city of Dwarka where Krishna ruled, the Maya Sabha of the Pandavas, and was the creator of many fabulous weapons for the gods. He is also called the divine carpenter, is mentioned in the Rig Veda, and is credited with Sthapatya Veda, the science of mechanics and architecture.
It falls on 'Kanya Sankranti' of Hindu Calendar. It is generally celebrated every year on gregorean date of 16 or 19 September which is on the last day of the Indian Bhado month, in Solar calendar. Solar Calendar observed by states such as Assam, Uttar Pradesh, Karnataka, West Bengal, Bihar, Jharkhand, Odisha, and Tripura. The festival is also celebrated in its neighbouring country Nepal.
The festival is observed primarily in factories and industrial areas, often on the shop floor. As a mark of reverence the day of worship is marked not only by the engineering and architectural community but by artisans, craftsmen, mechanics, smiths, welders, industrial workers, factory workers and others. They pray for a better future, safe working conditions and, above all, success in their respective fields. Workers also pray for the smooth functioning of various machines. It is customary for craftsmen to worship their tools in his name, refraining from using the tools while doing so. Modern electronic servers are also worshipped for their smooth functioning.
Special statues and pictures of Vishwakarma are normally installed in every workplace and factory. All workers gather in one common place and perform the puja (reverence).
Vishwakarma puja is also celebrated a day after Diwali, along with Govardhan Puja in October-November.