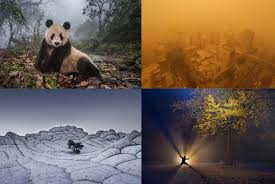 The 2015 Sony World Photography Awards gathered some of the best amateur and professional photos around the world and showcased them in an epic collection of the year’s best photography. The shortlist for this year’s competition is sure to please, featuring a series of beautiful and powerful images from a range of different categories.
The competition received a record total of 173,444

images from 171 countries this year – 24% more than in 2014. The overall winners, who will be revealed on April 23rd, are competing for a total of $30,000 in cash prizes. Participants competed in 13 professional, 10 open and 3 youth categories.“On the Tundra” by Simon Morris — People, Open A Young Nenets boy plays in -40 degrees on Yamal in the Winter in Siberia. An old Shepherd that had been surprised by snow storm in Gilan’s countrysides in the north of Iran. Series of images from the life of photographer’s family “Caesar” are portraits of children. They were all born by caesarean section and they only have a few seconds of life – all survived. These photographys are the first performance of a new human being, unique and primal. The photographs show a training session of sumo wrestlers from Miyagino stable in the Ryogoku district of Tokyo. The training was a very unique event as it was attended by Yokozuna Akuho Sho, who presented his master skills by taking part in several regular fights, all of which he obviously won. Special emphasis was put on showing how demanding sumo is an dhow fit and flexible the wrestlers are, what could be a surprise to those, who would judge them only by their appearance. The project “Restricted areas” is about utopian strive of humans for technological progress. Humans are always trying to own ever more than they have – this is the source of technical progress, which was the means to create various commodities, standards, as well as the tools of violence in order to keep the power over others. Better, higher, stronger – these ideals often express the main ideology of the governments, for these goals they are ready to sacrifice almost everything. The photographer attempts to capture the underwater grace and juxtaposition of the synchronized swimming team trainings in Singapore. The images were shot from a light aircraft flying at between 4,000 & 5,000ft. The height was crucial in order to flatten perspective by using long focal lengths. Time of day and cloud cover were also critical, the abstract effect being heightened by complete lack of signifying shadow. Long time member of the gym, Rocky provides comfort and acceptance to the performer. A portrait series showing the effect of the acid attacks in India. The first picture is a reproduction of her pictures before the attack and the other one is a portrait that I took. In the series I have constructed still live images using cats. Animals have their own will and they will not pose at the behest of the photographer. No other country provides such generous terms of parental leave as Sweden. The current system allows parents to stay at home with their child during 480 days in total – while receiving an allowance from the State. Out of these 480 days, sixty must be taken by the father or else are lost. These pelicans are resident on the point at Port Vincent on the Yorke Peninsular in South Australian and have become as opportunistic as the seagulls waiting for fish offal. Miracle Mile is my first photograph taken after relocating to Los Angeles from New York. Down syndrome is not a disease, it is not curable. People with Down syndrome have often physical and mental impairments that make them different from others. Since 2012 it is possible to determine by means of non-invasive tests before birth whether a child will have Down’s syndrome, as necessary, initiate an abortion. The photo series “one hundred and forty centimeters” raises questions about our relationship with the stigma of “living with impairment,” and the technical possibilities to determine this even before birth.

“A Life Apart: The Toll Of Obesity” by Lisa Kranttz — Contemporary Issues, Professional For years, Hector Garcia Jr. battled severe obesity and all its consequences: the pain, the ridicule and the lost hopes. After years of repeatedly gaining and losing hundreds of pounds, Garcia, who at one point weighed 636 pounds, once again was stuck in the back bedroom of his parents’ modest house, in San Antonio, Texas. His weight put him in a category known as severely obese, which makes up about 6.3 percent of the U.S. population.

“Glasgow; Second City of The Empire. On the run up to the Scottish Referendum,” by Dougie Wallace — Portraiture, Professional Photo taken during Artistic Gymnastics Tournament in Poland. Girls that participated were aged 8-12. Futuristic Archeology – Desertification in Mongolia Nomadic life has been central to traditional Mongolian culture throughout history. Even with changes brought about by urbanisation in recent years, 35% of Mongolians are living a nomadic life and thus still depend on their vast, open land for survival. This is increasingly difficult because their traditional way of life is now being threatened due to serious changes in the land. According to a survey made by the Mongolian government, around 850 lakes and 2000 rivers and streams have dried out.