TOP 10 COUNTRIES WHERE PROSTITUTION IS LEGAL 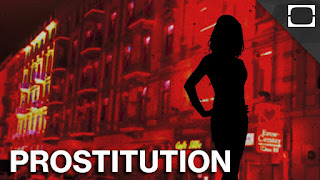 1. Netherlands, is one of the country with legal prostitution, Here 90% of sex workers are women and about 5% transgender and male.

2. BRAZIL - legal to prostitution but illegal to give work to prostitute in other work
3. Indonesia where it is tradition that prostitution are always met in entertainment venues.
4. Colombia, One of the  worst Prostitution Area and it is estimated that there are 35,000 children working as prostitutes here.
5. Greece - prostitution as an actual job in the society.

6. Germany legalized Prostitution in 1927 and they do receive various benefits which include pension.
7. Dominican Republic has 60,000 to 100,000 women work in the sex trade.
8. France is another common place with legal prostitution, where the age of non commercial sex is 15.
9. Prostitution has been legal for Kiwis since 2003.
10. By law it is illegal, but prostitution do regulate in Thailand which is approx. 3 million sex workers.