July 20, 2017
It’s not just us (Indians) who love getting messy during Holi festival .The world loves it just as much as us. Here are 10 festivals from around the World that are as messy and as fun as Holi.

The Boryeong Mud Festival is an annual festival which takes place during the summer in Boryeong, a town around 200 km south of Seoul, South Korea. So even the Koreans know how to get down and dirty…

You’ll know this one from Zindagi Na Milegi Dobara. La Tomatina is held in the Valencian town of Buñol, People participate in it for fun and throw tons of rotten tomatoes at each other. Awesome.

Songkran is basically Thailand’s New Year Day festival. What makes it different is that people run around the streets throwing ice cold water on each other and smearing beige coloured paste on anyone they can get their hands on. 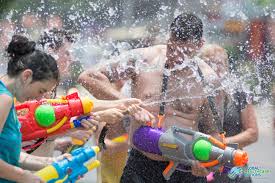 4. Battle of the Oranges

It’s like La Tomatina, but with oranges. The Battle of the Oranges is the biggest food fight in Italy. People organize themselves into two groups and spend the day pelting oranges at each other.

Citizens of Spain’s Ibi celebrate Els Enfarinats every year and go at each other with firecrackers, flour bombs and eggs. It’s like a less colourful, more hardcore Holi.

No prizes for guessing what this one’s about.  Haro Wine Festival takes place every year in the town of Haro in the La Rioja region of northern Spain. It involves wine drinking competitions and contests and a Batalla de Vino (Battle of Wine) where wines are poured at each other from buckets. Aww yeah.

The Garma Festival is an annual festival organized by Yothu Yindi Foundation held in Gulkula, at north-east of Arnhem Land in the Northern Territory of Australia. It is the most vibrant celebration of YoIngu Aboriginal people of northeastern Arnhem Land. Members of the tribe paint themselves in bright colours and dance throughout the day.

Every year the residents of Baza, in Granada, Spain; paint themselves head to toe in black paint and defend their beloved statue of the Virgin Mary from a resident (the Cascamorra) of the neighbouring town of Guadix who is intent on stealing it. Sounds like a lot of very messy fun.

The Paleo is the largest open-air music festival in Switzerland. Students and festival volunteers pay tribute to the 40th anniversary of the Woodstock music festival by playing around with mud as it was done in 1969 in Upstate New York.

Michigan plays host to a festival where mud-slinging is the name of the game. Youngsters and teens take to an artificially created mud field an slop around the messy stuff for hours. Just for the fun of getting dirty. 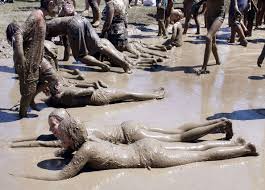